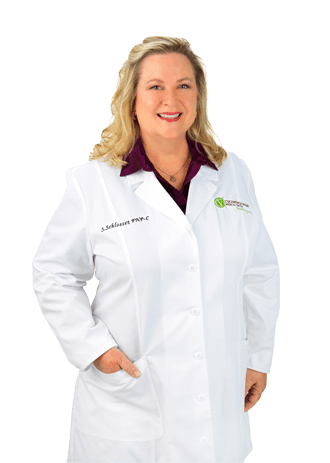 Stefanie Schlosser joined the CVMG team in 2021. She assists all patient groups and puts an emphasis on wholistic medicine and preventative health.

Ms. Schlosser is a graduate of Cypress College, where she earned a Registered Nurse degree. She spent more than 20 years working as a RN in a variety of fields, including as a nursing school instructor and a Disneyland RN.

Her journey towards becoming a Family Nurse Practitioner (FNP) actually began early in her career, as she opted to maintain a flexible RN schedule.

Born and raised in a large family in Whittier, Ms. Schlosser has called Southern California home for her entire life. She has resided in Los Angeles County, Orange County and now lives in the Inland Empire. She met and married her high school sweetheart and together raised four boys, three of whom are now married.

She grows organic fruit and uses the fruit she harvests to make jam. Other hobbies include traveling to new places and camping in Lake Tahoe. Ms. Schlosser collects and reads antique books.

She speaks both English and Spanish.